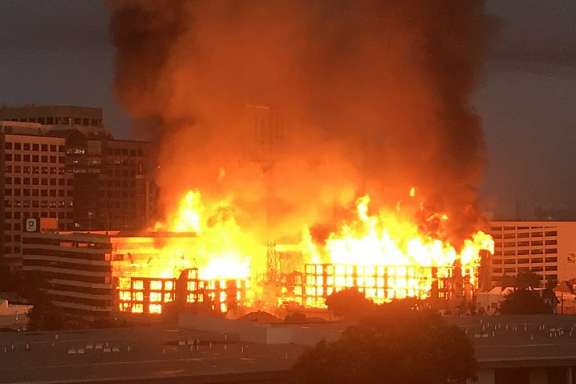 The fire that consumed an apartment and retail complex being built near downtown Oakland on Friday wasn’t the first to rip through a half-finished housing development in the area in recent years. It was the fifth.

While the cause of the latest blaze is not known, all four of the previous fires — including two at one site on the Oakland-Emeryville border — have been ruled arson by the federal Bureau of Alcohol, Tobacco, Firearms and Explosives, said agency spokeswoman Alexandria Corneiro.

One of the four previous fires, which broke out at a development just east of Lake Merritt last October, was publicly identified as arson by Corneiro for the first time late Friday. That has prompted concern among city leaders coping with a housing shortage, as well as developers who have responded by beefing up security at construction sites and residents shocked by images of flames and billowing smoke. All want answers, but there have been no arrests.

The previous arsons, according to the ATF, to hit projects under development:

A $35 million mixed-use project called the Intersection under construction in downtown Emeryville, on the Oakland border, hasburned twice in the past year in fires that were so big they damaged nearby homes and businesses. The ATF’s Corneiro said Friday that both cases were confirmed as arson.

After the latest blaze, on May 13, investigators released grainy images of a man in a sweatshirt riding a bicycle and wearing a backpack in the middle of the night near the seven-story complex, which is located on the 3800 block of San Pablo Avenue. A similar fire struck the project last July, and the second fire happened despite armed guards and surveillance cameras.

There were no injuries in the fires, which occurred when the complex was roughly half-built. A $100,000 reward is being offered for information that leads to the conviction of an arsonist. The Intersection is set to be built again, offering 105 residential units and 21,000 square feet of retail space.

The developer, Rick Holliday of Holliday Development, has told The Chronicle the fires were an “attack on housing.” The ATF has not commented on a possible motive.

A massive fire Oct. 31 gutted a three-story apartment complex under construction east of Oakland’s Lake Merritt. The fire was reported around 5 a.m. and quickly spread through the unfinished 41-unit building on the 300 block of Lester Avenue.

Corneiro said the cause was considered arson by ATF investigators, but she would not elaborate or specify whether the agency had identified possible suspects.

The owner, who has not responded to requests for comment, was sued in 2015 by former tenants who claimed he drove them out to make way for the new complex, ignoring a rodent infestation and allowing construction workers to tap into their electricity, causing sky-high utility bills.

On June 14, 2012, a blaze that authorities said was deliberately set tore through a construction site for the Red Star senior housing complex near the West Oakland BART Station, shutting down BART service for 12 hours and causing an estimated $25 million in damage. The project at Fifth Street and Mandela Parkway has not been rebuilt.

Federal investigators said they found where the fire started and how it began , but would not reveal what evidence led to their finding. A security guard, though, reported he had been forced to run from the site after being threatened by three young men shortly before the building went up in flames.

Laura Zaner, a spokeswoman for property owner the Michaels Organization, said Friday the company had given up on developing the project and was shopping for a buyer. She said the company was “devastated by the fire,” which halted the building of affordable housing units for senior citizens.

The complex was about two months from opening when it burned down, she said.